There is a lot of conflicting information online regarding fibromyalgia treatment and this article is intended to offer a different perspective on what works and what doesn’t work in the treatment of fibromyalgia.

Much of the treatment available today focuses primarily on treating the symptoms of fibromyalgia which, in the end, doesn’t do much good if you don’t get to the root cause of fibromyalgia.

Much of the latest research into fibromyalgia treatment focuses on the gut microbiome as a potential starting point for fibromyalgia/CFS. Did you know that approximately seventy to eighty percent of your immune tissue is located within your digestive system?

In fact the gut mucosa connects with the largest population of immune cells in the body. These are also known as gastrointestinal immune cells; which come from the lymphoid branch of the immune system. 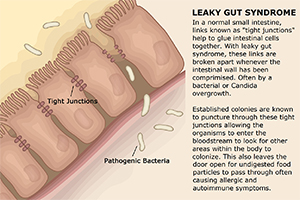 SIBO (small intestinal bacterial overgrowth) has been known to cause leaky gut syndrome which essentially is when small holes are punctured through the intestinal wall, leaving it open for toxins, bacteria and food particles to enter the bloodstream.

Once this happens, the body goes into a hyper-inflammatory response which can cause many of the symptoms that fibromyalgia sufferers deal with as well.

To add insult to injury, the bacteria that begin to proliferate within the gut during SIBO secrete neurotoxins that constantly are bombarding the body and getting into the bloodstream causing a plethora of neurological symptoms such as brain fog, muscle and body fatigue, depression and sleep disorders.

Research has shown that SIBO is very difficult to eradicate because of a tough, protective layer that these bacteria are able to produce known as biofilm. This biofilm is able to resist even the most powerful antibiotics.

This is a possible clue into why fibromyalgia is so difficult to eradicate and why so many who follow a treatment program often fall back into illness a short time after they stop.

If a protocol doesn’t address the underlying biofilm issue, it may be doomed from the start at producing any lasting treatment for the sufferer. And one is likely destined to go from treatment protocol to another, with minimal results until the biofilm layer is addressed and treated.

The Power of Enzymes and Probiotics:

There is one natural substance that has the ability to penetrate this tough biofilm and dissolve its protective layer. They are called proteolytic 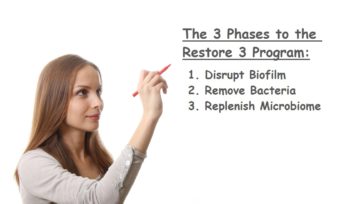 These are protein digesting enzymes that our body naturally produces, however, when dealing with biofilm disruption, a large amount of these enzymes are necessary and the body often times doesn’t produce enough.

Once we can penetrate this biofilm, our immune system, in conjunction with specialized probiotics can easily eradicate the overgrowth of bacteria beneath its surface.

Once the bacterial infection has been cleared up, the body is allowed to heal itself, including healing up any instance of leaky gut syndrome.

The specialized probiotics are there as the clean-up crew, so-to-speak, and help repopulate the gut microbiome with friendly bacteria and assist other friendly species in the gut to once again establish healthy colonies.

There have been many people who have already realized the key to treatment exists in dissolving the biofilm first, before any real bacterial overgrowth can be treated and a few of them have written a free report titled “The Biofilm Buster Action Plan” which is available for download here.